Two-and-a-half hours on the phone with John Tefteller and we barely scratched the surface—of his record collecting and restorations, his hits and misses, plus thousands of pieces of promotional artwork he stumbled upon in 2002—including the only known photograph of Charley Patton, "Father of the Delta Blues."

"Super nice guy," says blues music historian Scott Barretta of Tefteller. "I like the fact that he makes all the cool stuff he finds available. I hung out with him in Oxford one time and while we were together, he got a notice that a rare Paramount was up on eBay. He went back to his hotel room and within an hour the record was no longer up for auction, and he had made plans to pick it up in person."

John Tefteller has been collecting records for more than 40 years, and is one of the world's most prolific collectors of records on the old Paramount label. His 2002 purchase of the ultra-rare "Alcohol and Jake Blues" by Tommy Johnson for an astounding $37,100 has garnered him global fame.

If a time machine could propel him back a century, to one pre-war blues recording session with one artist, which musician would he choose?

This question gave the John Tefteller pause. He admits he'd never been asked that before.

A world-renowned collector of pre-war 78-rpm records, John's passion is country blues, rare so-called "race records" made between 1927 and 1935.

It's a thrilling thought—moving through time and space to be present in a rough makeshift recording studio, a lone now-legendary blues musician with his guitar at a primitive microphone, recording engineers and their rudimentary gear in the adjacent room, capturing music for the ages.

"C'mon, you can't give me one. At least three or four," John moans.

John rubbed the proverbial genie's bottle and spoke his first wish: "The most interesting to me would be Mississippi John Hurt. Of all the blues singers out there, he'd be number one. Some people don't even consider him a blues singer," muses John.

"I just love the way he plays, gentle, not aggressive. It's pure joyous music. They say he was the kindest, most gentle person."

Imagine traveling back in time to Monday, February 14, 1928, and entering the McCall Building in Memphis, where OKeh engineers had set up a temporary recording studio. A far cry from John Hurt's modest home in rural Avalon, Mississippi, the looming eleven-story building must have been intimidating to Hurt, who recalls the session as follows:

"...a great big hall with only the three of us in it: me, the man (Tommy G. Rockwell, the recording director for OKeh), and the engineer. It was really something. I sat on a chair, and they pushed the microphone right up to my mouth and told me that I couldn't move after they had found the right position. I had to keep my head absolutely still. Oh, I was nervous, and my neck was sore for days after." (Ratcliffe, Philip R. (2011). MIssissippi John Hurt: His Life, His Times, His Blues. University Press of Mississippi)

Were John Tefteller the fourth person in that hall, he would have heard Hurt's signature syncopated, rhythmic sound and gentle voice on "Frankie," "Nobody's Dirty Business," plus the six other sides that have never been found.

Back to the time machine. Who's next on John Tefteller's list—a country blues legend he'd like to see record live in the pre-war era?

A pinnacle of blues rarity, 22-20 Blues was covered by Robert Johnson who likely learned it from James himself. Johnson renamed the song "32-20 Blues."

"There was an ethereal quality about Skip James' music. It was like a sound from another world," John says. "His voice, that special quality, his voice soars and does all these little things. It's very sad."

"To see him at the height of his powers, that would be fabulous," John adds.

Combining an unusual open D-minor guitar tuning with intricate fingerpicking set against his eerie, high falsetto vocals, it's said James' early recordings could make the hair stand up on the back of your neck.

Peering through the keyhole back to the first Skip James sessions would propel John through time to late January 1931 in Grafton, Wisconsin, where Paramount's recording studio was located.

Referred to as a "barn," the roughshod studio was on the second floor in a deserted factory, an all-wood building more than 80 years old at the time, according to Paramount scholar and author Alex van der Tuuk in his book, "Paramount's Rise and Fall" (2003, 2012, 2019). Two rooms comprised the studio. The control room housed recording equipment, separated by a wall with an inset window and door to the actual studio where musicians performed. A piano and guitar were standard equipment in the studio.

And there would be a bluesman, 29-year-old Nehemiah Curtis "Skip" James, having traveled on a segregated Illinois Central passenger train from Jackson, Mississippi to Milwaukee, Wisconsin, ticket paid for by Jackson talent scout H.C. Speir. Greeting Skip in Milwaukee and transporting him 20 miles north to Grafton would be Art Laibly, recording manager for Paramount.

Had John been able to time travel back to the late January 1931 piano session to hear James' amazing impromptu "22-20 Blues," he would have likely witnessed Laibly placing a board beneath Skip's feet, and a recording engineer positioning a third microphone to capture Skip's foot-tapping that can be clearly heard on his "22-20 Blues."

Skip recorded this tune on the second of three days in Grafton, along with 25 more sides he claimed to have recorded for Paramount. When Laibly prompted him to come up with a song about a gun, Skip thought for a few minutes, then reeled off a spontaneous tune about a non-existent caliber:

"If I send for my baby, and she don't come

All the doctors in Wisconsin, sure won't help her none.

And if she gets unruly, and gets so she won't 'do'

As Skip repeated the second verse, he pounded on the board beneath his feet, as if to convey the violence he would inflict on his make-believe lover.

Imagine being a fly on the wall for that. 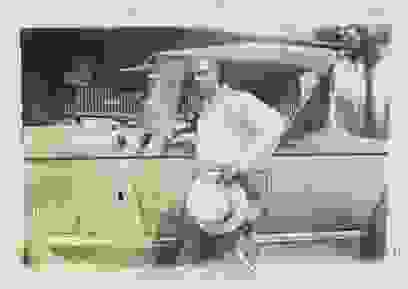 So who is third on John Tefteller's time travel list of pre-war blues legends he'd like to see record live?

"Son House. He was an extraordinarily powerful performer. He had that powerful voice and driving pounding guitar," says John, adding that House's 1930 "Walking Blues" was phenomenal.

It was the year before Skip James recorded for Paramount in Grafton that a carload of Mississippi Delta blues musicians arrived in Grafton, in August of 1930. Among them was Eddie James "Son" House, Jr.

Well lubricated with Prohibition-era illegal liquor they swigged during the 700-mile drive north, House and his fellow musicians Charley Patton, Willie Brown and Louise Johnson all played over several days in Grafton.

Had John been able to travel back in time to the Paramount studio where House first recorded, he would have witnessed the now-legendary bluesman record nine sides. Eight of them were released, including "Clarksdale Moan" and "My Black Mama - Part 1 & Part 2."

House also recorded his own "Walkin' Blues" with Willie Brown accompanying him on a second guitar. Paramount made a test pressing of the song, but it was unissued and lost until 1985 when the test pressing was offered at a yard sale in Waukegan, Illinois and scooped up by a collector; it is now in the hands of Richard Nevins, who runs the 78 reissue label Yazoo Records. In 1991 Nevins released the long-lost track, missing for 60 years, on his Yazoo label. But a remastered or fully restored version of it is yet to be released.

It sure would have been nice to hear Son House play his own "Walkin' Blues" live in the Paramount studio back in 1930, muses John. 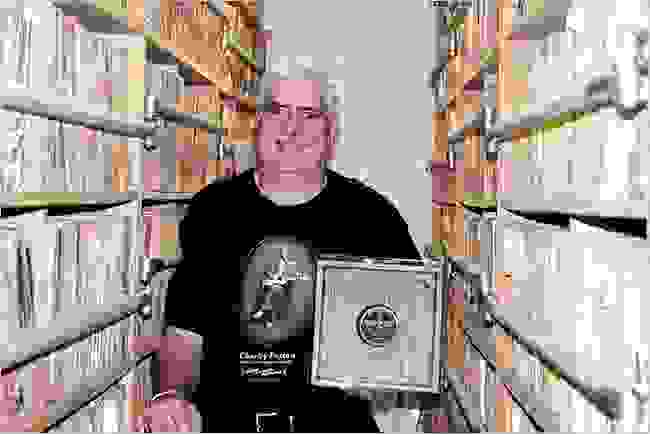 So John, what about Charley Patton?

"Most people think I would have said Charley Patton would be number one," says John. Maybe that's because he discovered the only known portrait of Patton back in 2002 in Grafton, Wisconsin.

"I don't think the other three would have brought their personal addictions into the studio like Charley Patton would have. Those would be the result of a lot of whiskey in his sessions—before, during and after. That must have made it difficult for the engineers at the time," adds John of Patton, who was known to be a heavy drinker.

Born more than a decade before Son House and Skip James, Patton was an influential Mississippi blues artist by 1907, when Skip and Son were each only five years old. Patton recorded on the Paramount label in 1929 and 1930, under two names besides his own—Elder J.J. Hadley and as "The Masked Marvel," the latter for a record promotion.

Says Alex van der Tuuk, "The Masked Marvel was a record contest, 'name this artist and you will get a record of choice for free' during the September and late October advertisement campaign in 1929 for Paramount 12805. A initial number of 10,000 flyers was printed to add to the record, giving an indication of sales figures. The same record was pressed again but after the contest under the name of Charley Patton. This record is much rarer."

If John had a fourth wish, it would definitely be the legendary Charley Patton, "Father of the Delta Blues."

John featured Patton on the cover of the 2004 Blues Images calendar/CD product (see images below), in what was the inaugural printing of this annual collectible piece.

A full-body portrait of legendary bluesman Charley Patton had never been found—until 2002 when John Tefteller stumbled upon it while in Grafton, Wisconsin—home to the Paramount label, where Patton had recorded.

On returning to his home in Grants Pass, Oregon, John wrote a revealing piece for the 78 Quarterly, detailing his incredible find.

More on John Tefteller (and the fine artists this piece)

fine artists whose work is featured in this story

Despite his obsession with record collecting, John Tefteller has been married to the same woman since 1982 and has three children, including his daughter Jennifer, shown here with him at Seattle's Public Market Center.

John has multiple businesses, including "World's Rarest Records" at tefteller.com. He holds monthly auctions from his inventory of Blues, Rhythm & Blues and Rock & Roll 78's with over 75,000 in stock. He also has more than 100,000 45's from the 1950's and early 1960's in the following categories: Blues, Rhythm & Blues, Rockabilly, Rock 'n' Roll, Girl Groups, Surf, and Country.

John was a member of the American Epic team, working with director Bernard MacMahon on the 2017 documentary media franchise based upon the first recordings of roots music in the United States during the 1920s and their cultural, social and technological impact on North America and the world. John's son Joel was also involved in American Epic.

The franchise comprises a three-part award-winning documentary film series, a feature-length musical documentary film, a book, ten album releases and an educational program. American Epic is widely considered as the definitive portrait of the musical era, and one of the best music documentaries ever made.

John has been featured in the New York Times, and in the 2014 book from American music journalist Amanda Petrusich, " Do Not Sell At Any Price: The Wild, Obsessive Hunt for the World's Rarest 78rpm Records."

Here's more about John's purchase of the 1930 "Alcohol and Jake Blues" by Tommy Johnson for $37,100—the highest price paid to date on eBay for a 78-rpm record.

Copyright © 2021 POINT DE VUE COMMUNICATIONS, INC. All Rights Reserved. No part of this site may be reproduced in whole or in part without prior written permission of the copyright owner.